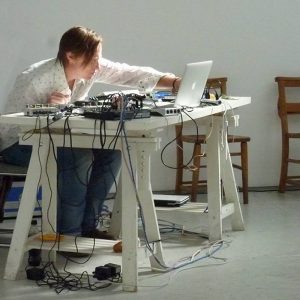 BEEF welcomes Bill Thompson to the Brunswick Club… Bill is a sound and video artist whose work involves the combination of found objects, field recordings, repurposed live electronics, and digital media to create evolving structures for installation and live performance. Bill creates immersive environments that slowly shift and evolve over time and that focus listeners’ attention on the act of perception as much as on the work itself. Originally trained as a guitarist, Bill has worked with live electronics for the better part of 15 years. Since 2016/17, however, he has returned to the guitar, performing with one built by Moog that combines built in electronics with miscellaneous table top devices, found objects, flashing lights, and the occasional vibrator. Bill’s compositions often involve long sustained tones, slowly evolving textures, and indeterminate or improvised structures. 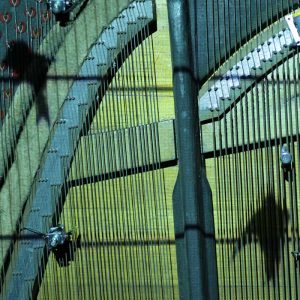 Support comes from BEEF member Kathy Hinde with long term collaborator Matthew Olden (aka i am the mighty jungulator). Kathy will bring her installation Piano Migrations which recycles the inside of an old upright piano into a kinetic sound sculpture. Videos of birds are projected directly onto the piano to provide an ever-changing musical score. The movement of the birds trigger small machines to twitch and flutter on the piano strings. In this work, nature controls machines to create delicate music.  This evening, the installation will become a site for an experimental improvisation where Kathy will be joined by Matthew Olden, performing with his own custom made live sampling software. Together they create a performance where image becomes sound and sound becomes image through a series of transformations realised through acoustic sound, live sampling, automata and projections.