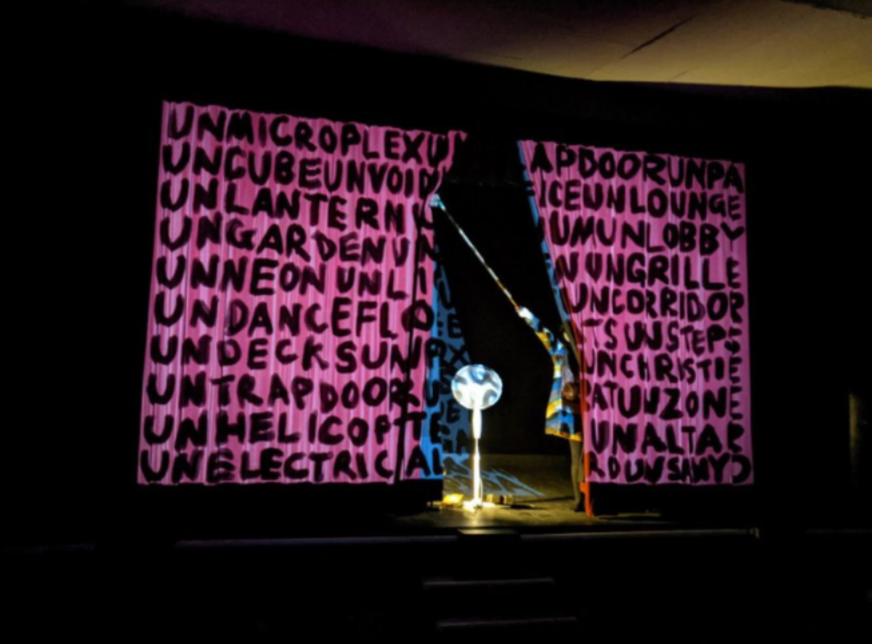 As a key figure in the early artist film scene in Britain, artist Ian Breakwell’s influence on later generations of creatives is strong, but it is often overlooked or under-recognised.

BEEF were invited to explore his legacy and respond to it creatively, focusing on Breakwell’s performative film practice, and his links with both Arnolfini as well as the Bristol Arts Centre (the ancestor of today’s Cube Microplex) to ‘play’ the cinemas and projection facilities in each institution.

BEEF presented an Expanded Cinema event at the Cube Microplex where Ian Breakwell ran the gallery, an alternative press bookstall and brought radical performance to the auditorium in the period 1960’s, responding to this history and the building as it is now.

BEEF DO BREAKWELL: A REPORT……..

“In 2021 BEEF were approached by Arnolfini to respond with a live event to an exhibition by Ian Breakwell. Separately there had been an offer from the Cube Microplex for BEEF to do one of their “playsthecube” residency, which are designed as an opportunity for artists to engage and play with the Cube over a longer period, and at a deeper level, rather than simply performing for an evening.For a period in the late 1960’s Ian Breakwell was based at The Bristol Arts Centre, which was housed in the building that is now the Cube. At that time he curated the gallery, hosted experimental events featuring noted underground figures of the time, and conceiving of auditorium as a place of production. This preceded a programme organised by the BFI in the early 1970’s called Eye To Eye which linked the Arts Centre and the recently established dockside Arnolfini. The Arnolfini’s Breakwell exhibition also centred around presentation of documentation of an Expanded Cinema event which had occured in Bristol Arts Centre in the early 1970’s.Aware of these historical connections, Arnolfini and Cube suggested combining the response to Breakwell and playstheCube residency into an overarching project named ABC, ambiguously standing for either Arnolfini / BEEF / Cube or Arnolfini / Breakwell / Cube, and echoing Bristol Art’s Centre’s three-letter acronym BAC.BEEFplaystheCube ran for 3 months with around 10 BEEF artists having significant access to the building with regular early morning to late night sessions while typical Cube activities were reduced due to the Covid-19 pandemic.New collaborations and working relationships were developed between BEEF members, as well as extension of individual practices, leading to a collective BEEFweekender Expanded Cinema presentation in September 2021.These public events occurred across, and in-between Arnolfini and Cube with work developed in the residency exploring collaborative script making, text, dairies, art walks, site-specific working, the apparatus and ritual of cinema, and the nature and equivalence of the two buildings – specifically the auditoria and projection rooms.During the BEEFplaysthecube the history of the building and Cube project’s self-determining ethos were explored, keying into previous experimental archeology projects, with a theme of “traces” emerging. In line with Cube’s ethos BEEF eschewed Google for the duration of the project adopting Cube’s open source tools for on-line collaboration and archiving.BEEF members were also invited to work with 35mm film and Cinema projection, with workshops lead by Cube founder Graeme Hogg to produce experiments exploring the installed machinery and found material from the two venues.The overall project, and public presentation became a deep exploration of Expanded Cinema, above, below, in front and behind The Screen, and stretching in time and space between the collaborating auditoria.”

5 pm : Audience to meet at Arnolfini where your BEEF instructed tour guide will take you on a sideways take on the walking tour. The tour begins at Breakwell’s UNWORD installation in Arnolfini’s Dark Studio, and continues through the city and up to The Cube.

6 pm : Arrive at Cube. An intermission / break for refreshment. Some sustenance will be provided for walkers.

7 pm  :  Performance in the Cube Auditorium