This summer, BEEF were extremely privileged to have three wonderful artists undertake residencies and host screenings and salons at our Pennywell Project Space. 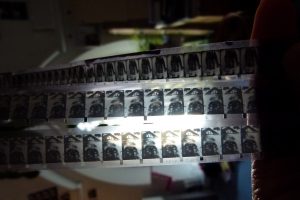 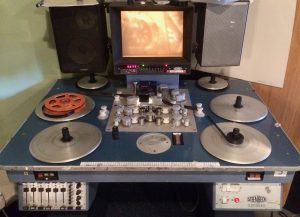 into the frameless distance: in search of ghosts in the city of (no) memory & across borderlines

W. G. Sebald’s search for the ‘nervature’ of the past (Franklin 2007: 133) provides contexts for ‘into the frameless distance’, a work-in-progress project (film/photography), focusing on my father, Miklós Gaál’s, escape from Hungary (1948); internment in a Displaced Persons camp (Austria, 1948/49) and claim for asylum (Belgium, 1950). Taking Daido’s Moriyama’s ‘grainy, blurry and out-of-focus’ approaches in Farewell Photography as an ‘otherworldly’ guide to open up the cracks and fissures of history and memory, I go armed with cameras, to a city with no memory (Budapest) and a river which will take me ‘into the frameless distance’ (Danube). The hope is that the lack of evidence pinning down a reality – or a truth of events – can be manifested through the visionary’s search in dreams, alchemy, the intangibility of memory and the tangibility of material fact imprinted on film.

How can experimental excavations in ‘documentary’ ‘photo/filmic’ practices expose historical and aesthetic fissures, and spaces for engagement, existing between fact and confabulation? Daido Moriyama’s ‘grainy, blurry and out-of-focus’ photography provides an otherworldly guide for investigating ephemeral spectres of history, travelling between past, present and future in a story of exile.

“It was a pleasure to be invited to BEEF for a wonderful, intensive residency week in August. The opportunity to host a small informal salon to discuss film and photographic processes for my current project also immensely facilitated the coalescence of concepts and processes to take forward. Thank you all for hospitality and support, loan of desk, projector, developing tank and good vibrations” Patti Gaal-Holmes 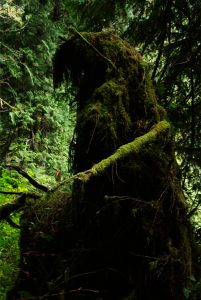 Kika Thorne is a Toronto based artist whose practice oscillates from action to abstraction to form sculpture, posters, moving images and social practice. Her talk began by screening Super 8 films of the October and February Group actions protesting Ontario’s Conservative government in the 90s, and circled back to expanded cinema through a sociality that extends beyond the human into molecular, corporate and silvan webs.

This residency was sponsored by the Canada Council for the Arts and carbon offset by the Great Bear Forest Carbon Project on Haida Gwaii. 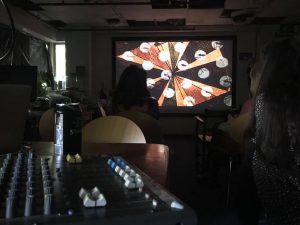 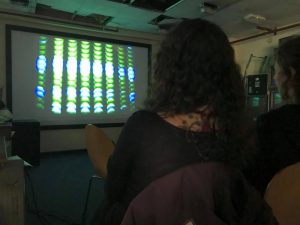 Material Universe is a screening series run by Kalpana Subramanian that aims to share experimental film work as part of an ongoing dialogue between filmmaking peers and film audiences across cultures and borders. All screenings made possible by the contribution of filmmakers through their work, and the support of local hosts and collaborators.

KALPANA SUBRAMANIAN is an artist-filmmaker and Ph.D candidate at the Department of Media Study at the State University of New York at Buffalo. Her research focuses on transcultural aesthetic approaches to the study of embodiment in experimental film and media. Her short films have been screened at various international festivals including the Yamagata International Documentary Film Festival (Japan), Interfilm Berlin (Germany), Toronto International Film Festival, Wildscreen UK, Antimatter Media Arts (Canada), Digital Anthropologies (France) and Olhar de Cinema (Brazil) among others. She was a Fulbright fellow at the University of Colorado Boulder (2016) and a UK Environmental Film Fellow (2006).