Women in Punk & No Wave Film and Music

Booking online for both events via eventbrite

This stimulating day-long event will look at how Punk created a new type of space for women and shaped alternative ways of looking and seeing, listening and hearing, speaking and shouting, dancing, dressing and protesting.

This inclusive event is open to all and considers an alternative to the prevalent punk narrative.

“Just as Punk created a space musically for bands such as the Slits and Poly Styrene to challenge 1970s norms of femininity through a transgressive, strident new female-ness, a number of experimental feminist filmmakers initiated a parallel, lens-based transgression to challenge patriarchal modes of filmmaking” Rachel Garfield

Afternoon: 12-5pm : Voice and Image in Punk and other Forms of Voice as Resistance

Irish artist Vivienne Dick is an internationally-celebrated film-maker and artist. Dick was a key figure within ‘No Wave’, a short-lived avant-garde scene in the late 1970s in New York led by a collective of musicians, filmmakers and artists including Nan Goldin, Lydia Lunch, Arto Lindsay, James Chance and many others. Dick has gone on to develop an extraordinary body of work which has been shown in cinemas, film festivals and art galleries around the world. Dick’s work is marked by an interest in urban street life, social and sexual politics, and the history of ideas.

Comprising selected films from the ‘No Wave’ period including Guérillère Talks (1978),

Rachel Garfield is an artist whose work often deals with disjunctions of narrative to explore the idea of the incoherent subject and the formation of subjectivity. Although primarily her work would be regarded as video-based fine art shown in gallery contexts, the work has an ongoing relationship with the traditions and concerns of avant garde documentary film.

In addition to her art practice, Rachel Garfield’s published writing typically explores the positioning of artists, processes of exclusion, hierarchies of victimhood, documentary practices and the politics of the subject, the encounter and the look; indeterminacy in the visual field often through the example of Diasporic communities; Landscape painting and the formation of Englishness in the 20th Century; Research Methodology in practice-led PhD in Fine Art.

Anne Robinson is an artist with a multi-disciplinary practice concerned with the perception and politics of time passing, working experimentally with duration, frame, exposure, paint surface, sound and movement. Her 1984 film Real Woman filmed in sunny, Southend is a subversive, seaside adventure with the Poison Girls featuring the amazing Vi Subversa.

Bellies! are Bristol based two-piece D-M Withers and Nat Brown. Their first album Sinister World Music is a concept album exploring the sinister dimensions of contemporary life. The Sinister World Bellies! conjure is populated by vast piles of poisonous digital waste, decomposing lives, the tyrannical reign of the credit devil, oodles of drivel, too much data and distracted consciousness.

Dali de Saint Paul is a Bristol based improvisation-led musician bringing raw energy and zeal through her vocals to stir up intoxicating emotion and fervour. She performs regularly with  Domestic Sound Cupboard, Viridian, HARRGA and will perform for this event with EP/64.  An improvisation troupe with variable geometry, EP/64 interact vigorously diving headfirst with their wild, free spirit steering and shifting into a frenzied explosion of sound that has to be seen to be experienced. EP/64 will be joined by Laura Phillips’ filmic wonders. 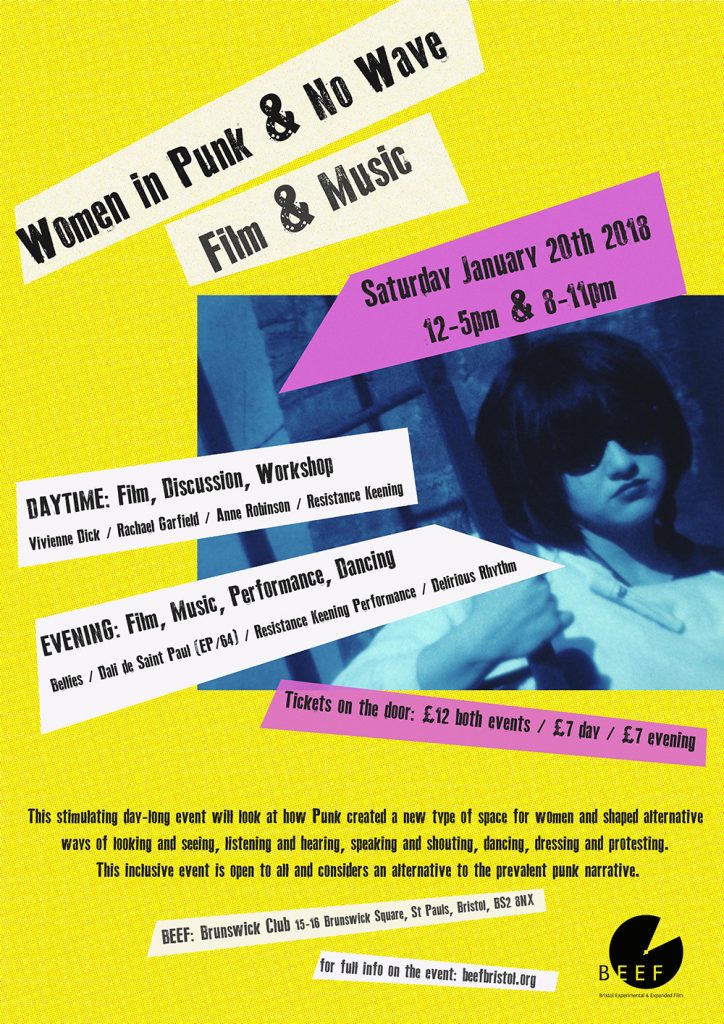